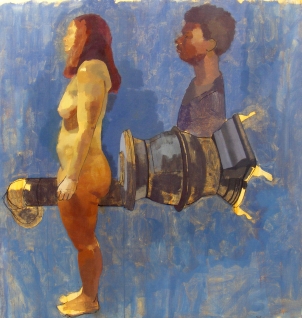 Sterling Shaw is a product of Philadelphia’s Public School System. He entered the Pennsylvania Academy of The Fine Arts in the year 2000 receiving his certificate in 2004 and was the beneficiary of a Cresson Memorial Travel Scholarship. His work has been exhibited at The Painting Center New York, The Woodmere Art Museum, Smile Gallery Philadelphia, BlinkArt Gallery, Delaware Center For Contemporary Art, Rosenfeld Gallery, The Main Line Art Center, Seraphin Gallery and Artists House Gallery. Select prizes include: Woodmere Endowment Fund Memorial Prize 2012, The Betsy Meyer Memorial Prize 2006, William Emlen Cresson Memorial Travel Scholarship 2004. Work included in various private and public collections, including the permanent collection of The Woodmere Art Museum and the Fellowship of the Pennsylvania Academy of the Fine Arts.  He is currently working from a studio in West Philadelphia.

“TRUST US” A one night only pop-up show in the building currently known as Trust. An amazing group of artists. Friday, November 2, 2012

Alumni Gallery Inaugural Exhibition at The Pennsylvania Academy Of The Fine Arts, November 2010

The American College Presents “Out of The Academy,” 2006