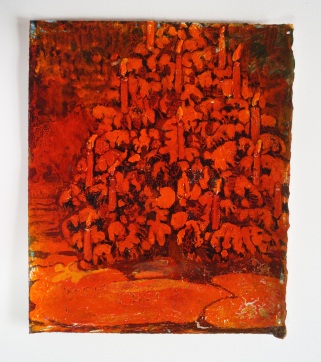 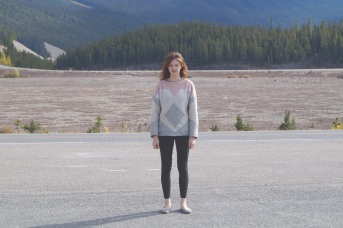 Catherine Ross was born in the Arctic town of Yellowknife, Canada, but was raised in Aberdeenshire, Scotland, where she lives currently. Her work explores the idea of ‘North’. She graduated as a painter from Gray’s School of Art in Aberdeen, Scotland in 2014. Since graduating, she has carried out her research through a variety of residency awards. She also taught as a lecturer in Painting at Gray’s from 2017-2019. In 2015, The Royal Scottish Academy awarded Catherine with their William Littlejohn Award for Excellence and Innovation in Water-Based Media. It allowed her to revisit her birthplace for the first time; Yellowknife, an arctic town in the Northwest Territories of Canada. Her life began there because of her father’s career as a meteorological observer in the high arctic. His work also brought Catherine and her family further south to Calgary, before settling back in Aberdeenshire, Scotland. With close reference to these ideas of early life, Catherine’s work has focused on ideas to do with these remote-seeming, northern environments. She has also been awarded residencies enabling study across Scotland and it’s islands. The Royal Drawing School, London, awarded her with a Scottish Artists Residency during January of 2019 at Dumfries House in Ayrshire. Whilst there, she examined marks left when carving wood with a ‘Canadian crooked knife’ and those made when drawing. Most recently, Catherine’s latest work has been particularly focused on water-based media and the use of certain papers as part of her continued investigation of her relationship with this idea of ‘north’.

The paintings reference an imprint. I refer to places from my childhood and experiences I have had in winter. This imprint allows me to tap into a kind of inborn alternative existence, and the paintings allow me to explore their narrative. Many of the paintings become saturated with colour but then are glazed over or washed to mute them, perhaps painting in the distance between my reality and this alter-existence. The washing away of colour to leave the paint’s residue, or glazing over and tinting the paintings, seems to be their authentication.