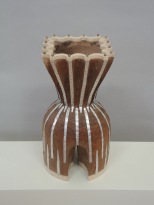 Artist Statement
“I express in my work the inherent structure and order found in nature. My sculpture presents forms in geometric compositions whose proportions and organization have been derived from mathematical formulae. My references come from basic, primal, fundamental images that transcend style or ethnic origin.

Currently my work includes the carving of city trees that have been cut down and will be discarded. I reuse the wood to give these beloved trees an extended life – now as sculpture. The carvings are inspired by and become a remembrance of the places from which they fell. The forms are the result of my ongoing exploration of growth patterns found in leaves, flowers, and human anatomy. I assemble these components into sculpture.”
-Linda Brenner

Biography
Linda often exhibits her work in shows and is represented in many collections. She has been a recipient of a Leeway Foundation WOO Award and Pennsylvania Council on the Arts SOS Stipend in addition to two residencies at the Hambidge Center for the Arts in Georgia. She has been teaching sculpture and drawing classes and has been a critic at the Pennsylvania Academy of the Fine Arts since 1988 and was Chairman of the sculpture department from ’92 –’95. Linda just retired from teaching in May of 2012, receiving the Dean’s Award for service.  Some of her recent work has been on exhibit at Philadelphia International Airport, Eastern State Penitentiary Historic Site, Perelman Center for Advanced Medicine, Pentimenti Gallery and at the Annenberg School of Communications (U Penn).

Linda has been involved in numerous projects and commissions, often in collaboration with others creating architectural models for museum exhibitions at the National Gallery of Art, PMA, MOCA and the Architectural Archives at the University of Pennsylvania which continue to travel internationally. These projects include models for the Louis I. Kahn retrospective, Venturi, Scott-Brown retrospective and Eastern State Penitentiary Historic Site.  The Kahn models recently toured internationally in an exhibition sponsored by the Vitra Design Company. The models were also included in the exhibition “LOUIS KAHN The Power of Architecture” at the Fabric Workshop and Museum in Philadelphia.