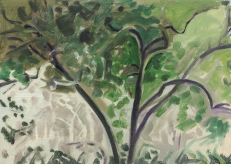 “Not everybody seems to see the world that they’re living in […] and it’s such a kick, really, seeing things.”
– Lois Dodd 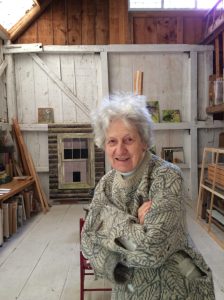 Lois Dodd (b.1927) first studied art and textile design while attending Cooper Union from 1945 to 1948. She was born in Montclair, New Jersey, where she continued to live while studying at Cooper Union, commuting daily into the city.

Dodd was one of five artists to establish the legendary Tanager Gallery in 1952, an important 10th Street co-op gallery where many young artists first found a platform for their work. She exhibited her paintings at the Tanager for ten years, and later went on to teach at Brooklyn College from 1971 to 1992.

While Lois Dodd’s over seventy-year-long career runs parallel to many major artistic movements, most notably abstract expressionism and pop art, her dedication to pursuing her own vision has consistently defied categorization. She is known for the careful simplicity of her paintings, that illustrate her attentiveness to, and appreciation for, the scenes she encounters in her immediate environment. In much of her work we see the land surrounding her home in Cushing, Maine, and the view out the window of her lower east side apartment. Windows, flowers, gardens, and clotheslines are of a particular fascination to Dodd, and she is celebrated for her ability to capture the complexity of these everyday subjects.

Dodd is an elected member of the American Academy of Arts and Letters and the National Academy of Design. In 2012 – 2013, the Kemper Museum of Contemporary Art in Kansas City, Missouri, organized a traveling retrospective of Dodd’s paintings, which was accompanied by the book Catching the Light. In 2017 Lund Humphries published a stand-alone monograph of her work as part of their new Contemporary Artist series, which is available for purchase at the gallery. Dodd is still painting at the age of 91, and divides her time between Maine, the Delaware Water Gap, and New York City.