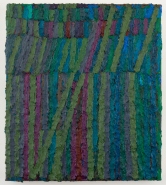 Biography
Brett Baker’s intensely worked paintings are characterized by an unusually physical interplay of drawing and color. He builds each painting over several years, layering and removing rows of vertical and diagonal marks of muted, intense color. Critic Jed Perl, describing Brett’s work, has noted, “Their tight­packed, elongated rectangular forms—which are invariably based on a rather simple grid—bring to mind some of the layered compositions of Paul Klee as well as some of the textiles of Anni Albers.”

Although relentlessly abstract, Brett’s paintings are meditations on his immediate surroundings. He employs observation to enliven and disrupt the expected regularity of the grid. The resulting paintings become dynamic, abstract environments infused with and energized by nature. The artist writes: “The question I’m trying to answer is how does one begin and end in abstraction and still realize a true and real impression of the world beyond the painting?”

Brett lives and works in Raleigh, North Carolina. He is represented in New York by Elizabeth Harris Gallery where he has had three solo shows (2013, 2015, and 2018). He has an MFA in Painting from Boston University and his awards include a Guggenheim Fellowship. His work has been featured and reviewed in The New York Review of Books, The New Republic, The New Criterion, Two Coats of Paint, and various other blogs and publications.

In addition to being an artist, he is the editor of Painters’ Table (painters­-table.com), an online painting magazine. He also writes frequently about art – recent subjects include Pat Passlof, Chaim Soutine, George Braque, and Nicolas De Staël.

On Beauty: the Paintings of Brett Baker by Jennifer Samet