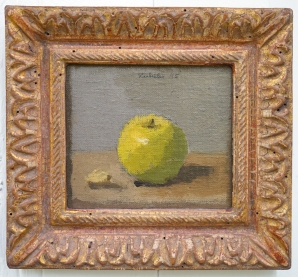 …for much of his life Mr. Kulicke was the most innovative and influential picture frame designer in the United States.  […]  But Mr. Kulicke considered painting his life’s work.
-New York Times

Robert Moore Kulicke (1924 – December 14, 2007)
Born in Philadelphia in 1924, Robert M. Kulicke attended the Tyler School of Art (Temple University) and the Philadelphia Museum School. In 1949, he studied in Paris with Fernand Léger at the Academie Leger, Paris. Davis & Langdale Company exclusively represented the work of Robert M. Kulicke since 1974 and continues to represent the estate of the artist.

Robert M. Kulicke primarily painted still lifes, such as a jar of olives, a bouquet of flowers and, his signature subject, pears. Intimate in scale, Kulicke’s paintings are often paired with frames handmade by the artist, frequently based on historical frame designs.

Kulicke had an annual exhibition at Davis & Langdale Company from 1974 until his death in 2007. He also had exhibitions at Museum of Art, The Pennsylvania State University (1978), John F. Warren, Philadelphia, Pennsylvania, (Color of Money: Robert Kulicke’s Dollar Bill Paintings, 1988), Columbia Museums of Art and Science, South Carolina (1983), and Campbell-Thiebaud Gallery, San Francisco (1991, 1994) and others. Since the early 1960s, Robert M. Kulicke has designed frames for both traditional and contemporary use.

Paul Cummings interviewed Kulicke in 1968 for an oral history for the Archives of American Art.

In 1994 Kulicke was featured on CBS News “Sunday Morning” in their segment “Profile of Artist: Robert Kulicke.” The interview was conducted by Anthony Mason in Kulicke’s studio on the West Side of Manhattan. In it, Kulicke discussed his career while demonstrating the process of creating a credible reproduction frame.

In 1988 Kulicke was elected an Associate Member of National Academy of Design.  Kulicke was the Co-Director of the Kulicke-Stark Academy in New York City until 1974, and was an associate of the Jewelry Arts Institute from 1987 until his passing.

Robert M. Kulicke passed away in December of 2007.