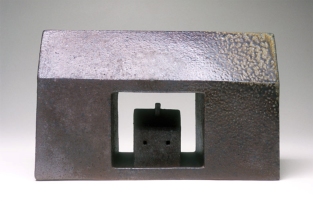 Biography
Robert Winokur (b. 1933, Brooklyn, NY) has spent his fifty-nine-year career engaged in the pursuit of form. Introduced to ceramics by his mother as a young boy, he took up sculpture and pottery under the tutelage of Rudolf Staffel at Temple University in Philadelphia. He received a bachelor of fine arts degree in 1956 from Temple’s Tyler School of Art, where he majored in sculpture and ceramics. Subsequently, he obtained a master of fine arts degree in ceramics from the New York State College of Ceramics at Alfred University in 1958.

While realizing the possibilities of his own form of artistic expression Winokur helped several generations of students explore theirs, teaching at Tyler School of Art at the invitation of Staffel, from 1966 until his retirement in 2005. He maintains a home, studios, kilns and a gallery in Horsham, Pennsylvania.

Like many ceramists, Winokur focused on functional wares in his early work. Eventually, he began expanding his concept of vessels and containers by experimenting with volume and exploring the study of architectural forms such as houses and barns. The basic elements of visual design — line, form, shape — are foundational to his process, yet he treats the vessel as a canvas for expression. He explores ideas by bringing them to life in clay. His sculpture, rife with whimsy, subtle humor, and irreverent joy, simultaneously conveys feelings of uncertainty, apprehension, and instability. This, he explains, is the “business of contrasts.” Concerned with the viewers and their points of view, Winokur invites them to “bring their life to it” and to “project their imagination” upon his work.

Artist Statement
Having been a potter for a long time it occurred to me that a house is a unique kind of container. I think the thought grew out of a fantasy I had once in which I made vessels so large that I had to lower myself down over the side on a scaffold, from the top, in order to decorate it. A pot that size would be as big as a house.

A house is a unique kind of container; One that is imbued with a deep set of profound and multi-layered psychic associations. To a child a house represents warmth, family, love, security and identity. In the process of my doing houses, they became, for me, a symbol of choice and I have been working with the form for more than ten years.

I don’t know when it was that I became fascinated and enthralled by artwork done by children and in particular with the drawings and paintings done by them of houses. What I find truly compelling about theses works was their innocence, exuberance and spontaneity

Those qualities and elements of children’s art that inspired me to work with the house surface every now and then but the sense of joy, euphoria, playfulness and spontaneity has been replaced by a kind of somber introspection. Perhaps it is the color of the clay coupled with the construction process I use to make the houses that moves me in this direction this.

Like sculptures of Equestrian Horsemen or Madonna’s with Child the houses have become, a form, a kind of abstraction that expresses, on one level, a formal study of variations on the theme and, on another, an exploration of the possibilities that can be wrung from the symbol. The ladders and the asparagus are recent elements that I have taken to. They do all sorts of neat things to modify and alter the way in which the houses are seen

For me what looks right determines whether a piece “works” or not. There is no conscious intellectual mechanism and certainly no pre-existing manifesto at play here. As the little girl told the psychologist who asked her to tell him about her drawing said. “This is not a story this is a picture to be looked at”

The pragmatic description of what it is I do is that I use Pennsylvania brick clay mixed with fire clay to construct the houses out of slabs of clay. I fire the houses to c/9 / 10 in a salt kiln.